The concept of a large forest dynamics plot (FDP) in Khao Yai National Park was dreamed up around 1997. The forest was quite pristine and the park had high accessibility, and in addition, had already become a gibbon field research site which was attracting local and international researchers. In order to facilitate studies of gibbons (Hylobates lar) as well as bird populations, in conjunction with forest dynamics, a rectangular 30-ha FDP was established around the territory of the main gibbon study group A. The initial rationale of establishing the plot was to facilitate identification of plant food species and to promote integration of forest dynamics study with animal ecology, especially animal diets and foraging. The first complete tree census was carried out in 2004, following ForestGEO (then CTFS) protocols. The 4th complete census is being carried out in 2021 and should be finished in early 2022.

The plot is covered with late-successional to old-growth seasonal evergreen forest which, at 725–815 m altitude, is somewhat cooler and moister than that in the Huai Kha Khaeng plot in western Thailand, and cooler and drier than the Khao Chong plot in peninsular Thailand. Annual rainfall averages 2073 mm (21-year average, range 1264–2939 mm) and mean annual temperature is 22.4°C. The dry season averages c. 5 months in duration (usually November – March) with a range of 3–7 months with rainfall <100 mm/month. Reaching over 800 m in altitude, the Mo Singto plot has some floristic elements typical of lower montane forest, such as an abundance of Castanopsis acuminatissima. Only one dipterocarp species has high importance on the plot: Dipterocarpus gracilis, with 2.45% of stems and 8.73% of basal area. Family Annonaceae ranks highest in terms of number of stems (25.5% of total), and Rubiaceae and Lauraceae in terms of numbers of species (25 and 22, respectively).

The Mo Singto plot has a number of characteristics which distinguish it from most other plots in the ForestGEO network. The surrounding forest boasts a relatively complete faunal assemblage present, which includes dense populations of gibbons and pig-tail macaques, Asian wild boar, sambar, muntjac, Asian wild elephant, two species of bears, five species of civets, and a diverse bird fauna including four species of hornbills. For this reason, many researchers have focused on seed dispersal, with special emphasis on gibbon diet and foraging and relations with trees and lianas. Another advantage of the Mo Singto plot is its relatively complete botanical inventory, with vouchers housed in the BBH herbarium located at NSTDA, and also distributed to A (Harvard). There are no trees on the Mo Singto plot without species id, and a diverse assemblage of lianas is at least 90% identified. Some recent research projects are exploring the role of lianas in the forest community.

During the inventory of species on the Mo Singto plot, two remarkable tree species new to science were discovered. One (Pouteria stellibacca Maxw., Sapotaceae) is a rare, large, upper-canopy tree with graceful, robe-like buttresses. The other (Polyalthia khaoyaiensis P. Bunchalee & Chantar., Annonaceae) is an understory tree with an unusual leaning growth form, which happens to be the most abundant species in the plot! 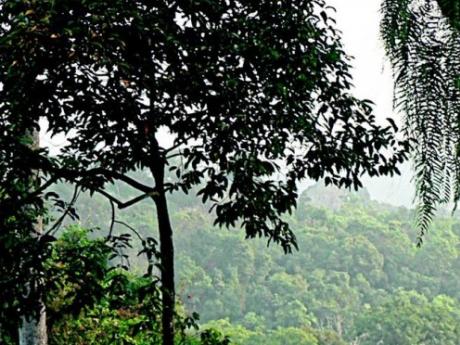 Window Into the Forest