The 25-ha Rabi Forest Monitoring Plot is part of the Gabon Biodiversity Program and represents a scientific partnership between the Smithsonian National Zoological Park's Conservation Biology Institute/Center for Conservation and Sustainability and Gabon’s National Center for Scientific and Technological Research (CENAREST) through its Institute for Research in Tropical Ecology (IRET) and Institute of Pharmacopeia and Traditional Medicine (IPHAMETRA).

The plot is located in southwestern Gabon's Gamba Complex of Protected Areas, an area that is very high in biodiversity. It is highly representative of the Guineo-Congolian rainforest that abounds in the Rabi landscape and contains a diverse mix of upland and wet-forest habitats. The research site is within a mosaic of oil and forestry concessions. The Compagnie des Bois du Gabon (CBG) and Assala Gabon are key partners in supporting the research work.

The Rabi Forest Monitoring Plot provides data for studies of forest regeneration, carbon dynamics, and biodiversity. In addition, research there also helps build scientific and resource-management capacity in the region. The topographic survey of the plot was completed in late 2009. Tree tagging, mapping, and identification began in June 2010 and ended in June 2012.  During this first census, over 175,000 trees with dbh ≥ 1cm were inventoried, belonging to 345 species of which several new to science.  In 2016 & 2017 a second census was completed.

We thank the Compagnie des Bois du Gabon and Assala Garbon for their financial, logistical, and publicity support: 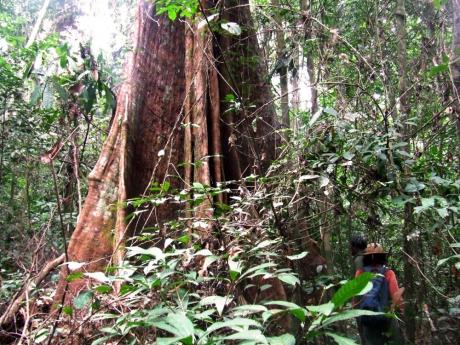