The Palanan PFDP is located in an aseasonal forest in the typhoon belt, and is being compared with the Luquillo FDP in Puerto Rico's hurricane belt. As of the 2016 re-census, there are 325 species from 154 genera in 70 families:

The three-fold mission of the Palanan FDP is:

This mission reflects the fact that illegal logging, over‑exploitation of forest resources, and land-use changes have affected the Palanan ecosystem and that economic and social pressures threaten the integrity of the area's indigenous Agta community. The Palanan PFDP will provide some of the necessary biological information needed to preserve and use forest resources responsibly, and it will also help promote locally-owned and operated enterprises that increase incentives for the conservation of biological diversity.  In 2012, studies on other aspects of the Palanan PFDP such as the ecology of bat assemblage commenced and continue to date. Pollination and seed dispersal studies as well as genetic studies of trees and bats are also ongoing.

In 1994, Isabela State University, Conservation International Philippines and ForestGEO initiated the Palanan Permanent Forest Dynamics Plot (PFDP) as an 8-ha plot, later expanded to 16-ha in 1998. A re-census had been undertaken in 2004, 2010 and 2016, with supertyphoons hitting Palanan either before the recensus [Typhoon Imbudo (Category 4) in July 2003] or after the recensus [Typhoon Meji (Category 5 )in October 2010]and [Typhoon Haima (Category 5) in October 2016].  Since 2010, the management of the Palanan PFDP had passed on to the Institute of Biology, College of Science, University of the Philippines Diliman (UP Biology).

Funding had been provided by various Philippine institutions such as the University of the Philippines Office of the Vice President for Academic Affairs’ Emerging Inter-Disclipinary Research Program (UP OVPAA EIDR), the Commission on Higher Education, the University of the Philippines Diliman Office of the Vice Chancellor for Research and Development (UPD OVCRD), the Diliman Science Research Foundation, the Energy Development Corporation (EDC), the Forest Foundation Philippines and the Department of Science and Technology through the Philippine Council for Agricultural and Aquatic Resources Research and Development (DOST-PCAARRD), among others. The ForestGEO continues to provide resources in the maintenance of the Palanan PFDP and in the conduct of all re-censuses.

These institutions were involved in the establishment of the plot but are no longer active: Arnold Arboretum of Harvard University, Conservation International, and Isabela State University. 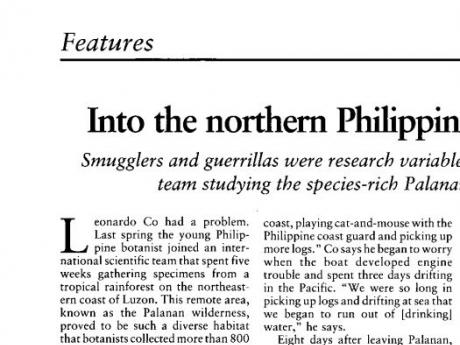 Into the Northern Philippines Rain Forest

This fascinating feature profiles Leonard Co, founder of the Palanan plot, and discusses the difficulties of field research in a biologically-rich, geographically-remote  area.