We use identical methods to monitor the production of flowers and seeds and the recruitment, growth and mortality of seedlings in four Neotropical forests. Each study takes place in a large (6 to 50 ha) Forest Dynamics Plot (FDP). All free-standing woody stems larger than 1 cm in diameter at breast height are mapped, identified and measured at five year intervals in each FDP. Together, our studies of seed production and seedling, sapling and adult performance document the complete life cycles of more than 1,000 Neotropical tree species. The flower, seed and seedling data address a wide range of basic research questions and global change issues.

Environmental Control of the Timing of Flowering and Fruiting

In temperate and boreal latitudes, an inhospitable winter and seasonal changes in temperature and photoperiod control the timing of flowering and fruiting or reproductive phenology of most plants. In contrast, the growing season never ends in the wet tropics, seasonal temperature variation is usually less than diurnal variation, and at the equator, photoperiod is constant. Current understanding of the environmental controls of phenology of wet tropical forest plants consists of hypotheses. Our data provides weekly (to twice monthly) temporal resolution for up to 23 years for more than 1,000 tropical forest plant species to test these hypotheses. Our analyses have provided numerous insights into environmental controls of seasonal and inter-annual variation in flower and seed production.

Seed dispersal controls the ability of plants to reach regeneration sites and to colonize new habitats. We are able to estimate seed dispersal distances using the locations of our seed traps and all potential seed-bearing trees within the large Forest Dynamics Plot. Our analyses have provided insights into species attributes that influence seed dispersal and the consequences for seed limitation and species coexistence.

Our data on seed production, seedling recruitment and seedling growth and survival combined with ForestGEO data on sapling and adult growth and survival provide the only complete life cycle information for any tropical tree species. Our analyses of these spatially explicit data have established widespread negative density dependence, in which individual performance declines as the local abundance of conspecifics increases. A new generation of studies will integrate all life stages from seed to adult to evaluate the life time strength of density dependence for populations and the potential to maintain hundreds to thousands of co-existing species.

Human activities are increasing atmospheric concentrations of carbon dioxide and other trace gasses, increasing deposition of nitrogen and other pollutants, and changing the global climate. Allocation to reproduction is a potentially sensitive indicator of plant responses to global atmospheric and climate change. Our analyses have detected long-term changes in flower production and in production by different life forms that appear to be responses to these anthropogenic drivers.

We initiated seed and seedling studies at Barro Colorado Island, Panamá in 1987; Luquillo, Puerto Rico in 1992; Parque Nacional San Lorenzo, Panamá in 1997; and Estacion Cientifica Yasuni, Ecuador in 2000. Funding is from the Smithsonian Institution (Panamá) and the National Science Foundation of the United States (Ecuador and Puerto Rico).

The four long-term studies of flower and seed production and seedling recruitment, growth and survival as of 1 January 2011.

* 200 traps were located in a stratified random manner in 1987. Fifty additional traps were randomly located in natural tree fall gaps between 2002 and 2004.
** approximate

We use identical methods to monitor flower and seed production and the recruitment, growth and mortality of seedlings for trees and lianas (woody vines) in four Neotropical forests. A large number of census stations (120 to 250) are located within a large Forest Dynamics Plot at each site. Each station includes one 0.5-m2 flower/seed trap and three 1-m2 seedling plots (Fig. 1). Detailed descriptions of the methods used in the seed and seedling components of the study follow. 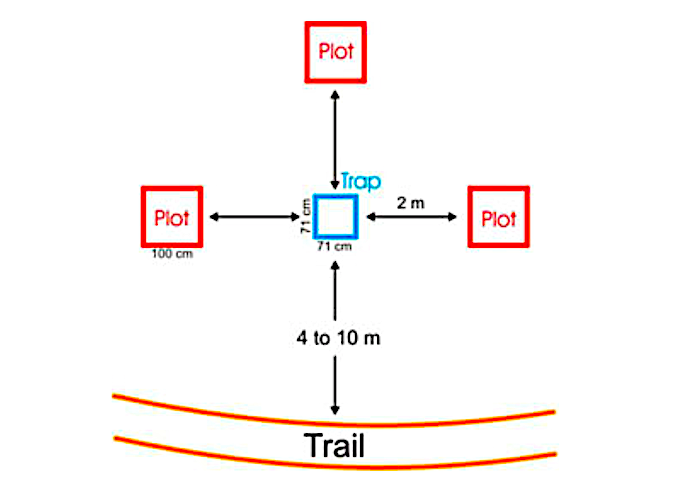 A schematic diagram of a census station at Barro Colorado Island, Panamá or Yasuni, Ecuador. Census stations are identical at Luquillo, Puerto Rico and the Parque Nacional San Lorenzo, Panamá except there were no pre-existing trails at these sites.

We census flower/seed traps (Fig. 2) each week in Panamá, every second week in Puerto Rico and twice each month in Ecuador. Botanically gifted technicians identify all plant reproductive parts to species. Flowers of all species and reproductive buds of selected species are recorded on a logarithmic scale (1, 2-10, 11-100, 101-1000, >1000). Staminate flowers are recorded separately in Panamá. Immature fruit, mature fruit, seeds, “capsules”, fruit damaged by pre-dispersal predators, and fruit fragments are counted for all species. A filled endosperm distinguishes mature from immature fruit for most species. “Capsules” refer to pedicels, bracts, valves or another fruit part that arboreal vertebrates never consume and enable estimates of fruit consumption by arboreal vertebrates. Approximately 80% of our species have a “capsule” that can be identified to species. Fruit damaged by pre-dispersal seed predators bear an emergence hole. Fragments occur when birds, bats and arboreal vertebrates drop fruit parts. We estimate the number of whole fruits represented by fragments by counting points of attachment to pedicels. We can convert among seeds, “capsules” and mature fruit using seed-to-fruit and capsule-to-fruit ratios determined for each species. Photographs of all reproductive parts for Panama can be viewed and downloaded (http://www.stri.si.edu/sites/esp//tesp/plant_search_quick.htm).

Each flower/seed trap has a surface area of 0.5 m2. Traps consist of a square, open-topped, 1-mm mesh bag supported by a polyvinyl chloride (PVC) frame (Fig. 2). Two legs of each trap are mounted on lengths of concrete reinforcing bar previously driven into the ground to ensure that traps never move. Traps are located at 13.5 m intervals on alternating sides of pre-existing trails and randomly between 4 and 10 m from the trail at Barro Colorado Island and Yasuni and randomly at Luquillo and the Parque Nacional San Lorenzo where there were no pre-existing trails 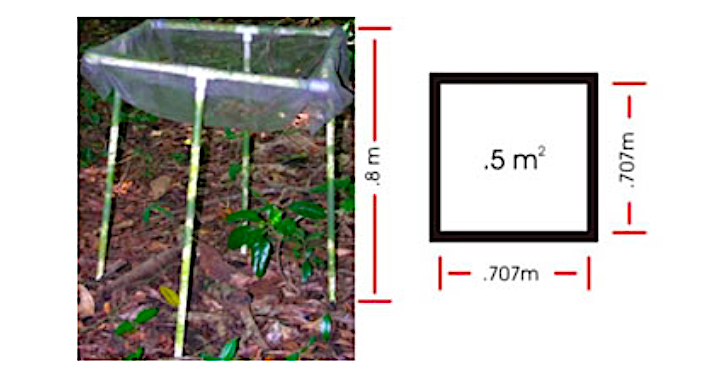 The materials used to build one flower/seed trap follow:

We use 0.5 inch diameter PVC for water lines. Electrical conduit will not work. The PVC elbows and tees can be replaced with PVC “right angles out”. “Right angles out” form the corners of a cube, are used in irrigation systems, but are hard to find in wet, tropical countries.

We census seedling plots (Fig. 1) once each year at all sites. Every woody seedling is identified, measured (height and number of leaves), and permanently tagged with a numbered band. Canopy photographs are taken over each seedling plot each year to assess light availability.

Species-level identifications are enabled by the pioneering work of Dr. Nancy Garwood for Panamá and Ecuador (X reference to Nancy’s book; unpublished) and by the relatively modest number of species for Puerto Rico.

We measured every woody seedling less than 50 cm tall in the initial census at each site. We continue to census seedlings that grow taller than 50 cm. Seedlings too small to support a numbered band (< 3 cm tall) are temporarily marked with color coded plastic tooth picks. The tooth picks are replaced by numbered bands in subsequent censuses if the seedling survives to an appropriate size.

**This section is under construction.  Thank you for your patience as we populate it.

Data Users are REQUIRED to sign and mail (or scan and email) our 'Conditions of Use Agreement' to S. Joseph Wright. We ask Data Users to consult the Data Owners on each specific use of their data and to offer the Data Owners the possibility of collaboration and co-authorship as appropriate.

Conditions of Use Agreement - COMING SOON