The Center for Tropical Forest Science - Forest Global Earth Observatory (CTFS-ForestGEO) in partnership with the Chinese Forest Biodiversity Monitoring Network (CForBio) held its annual data analysis workshop this month. The workshop is supported by the National Science Foundation (NSF) through the Dimensions of Biodiversity Program and was hosted by the Chinese Academy of Forestry at the Jianfengling 60ha forest plot on Hainan Island in southeast China. The grant, entitled “Dimensions US-China: Integrating the functional, phylogenetic and genetic components of diversity for improved an understanding of forest change and biodiversity” funds annual workshops for graduate students, postdocs, and senior scientists to gather and collaborate on their research and exchange data and ideas.

The group included 65 participants hailing from 20 countries spanning North and South America, Africa, Europe, and Asia. All participants worked diligently and were pleased with the amount of science and training accomplished during the two week workshop.

The workshop mission was to bring together a global network of forest researchers to foster research advances and scientific collaborations. This is carried out though an ongoing collaboration between CTFS – ForestGEO and the CForBio with the Chinese Academy of Sciences. Among 51 plots in the CTFS-ForestGEO and CForBio networks, a vast amount of research is being done on how dimensions of biodiversity are changing in forests. Forests everywhere are under threat from deforestation, pollution, invasive species, degradation, and climate and atmospheric change. Understanding and analyzing the data on tree species functional traits, phylogeny, and genetics from the network will inform predictions of forests’ dynamic responses to anthropogenic change.

Participants worked tirelessly to curate and analyze the immense amount of data pouring out of the global network. The approach centered around small “break out” groups focused on how the dimensions of forest biodiversity regulate the dynamics of tropical forests around the world. Each group received close hands-on mentoring by senior scientists associated with Smithsonian Institute and CTFS-ForestGEO. Participants were guided through the analyses and writing stages of their projects in order to produce manuscripts intended for submission to a peer-reviewed scientific journal.

This intense work schedule was punctuated by lively group meals, happy hours, and lots of joking and cultural exchange. Each day was bookended by lectures from the postdocs and scientists in attendance. Among the notable mentors this year was Steve Hubbell who gave a lecture on forest diversity. A highlight for many participants was the day trip to the Jianfengling 60 ha forest dynamic plot, which is a tropical submontane rainforest notable for its adaptation to seasonal typhoon disturbances. The 65 researchers all trekked the 5 km through bouts of torrential downpours- a proud testament to the fieldwork experience and fortitude possessed by the participants!

The workshop culminated in an all-day symposium where each participant gave 5-minute lightning talks about their projects and the progress they had made during the workshop. There is no doubt that dozens of CTFS-ForestGEO manuscripts published this year will be largely thanks to the hard work accomplished in Hainan!

The friendships and connections fostered among participants made the last day bittersweet, but all agreed to prioritize attending the next annual workshop in the USA. 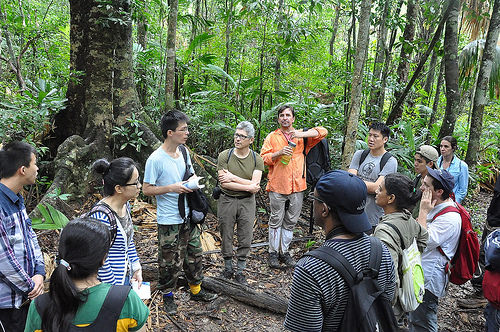