Stories from the Field

Bruno Oliva Gimenez is a postdoctoral fellow with ForestGEO and NGEE-Tropics studying the ecophysiology of tropical forests. 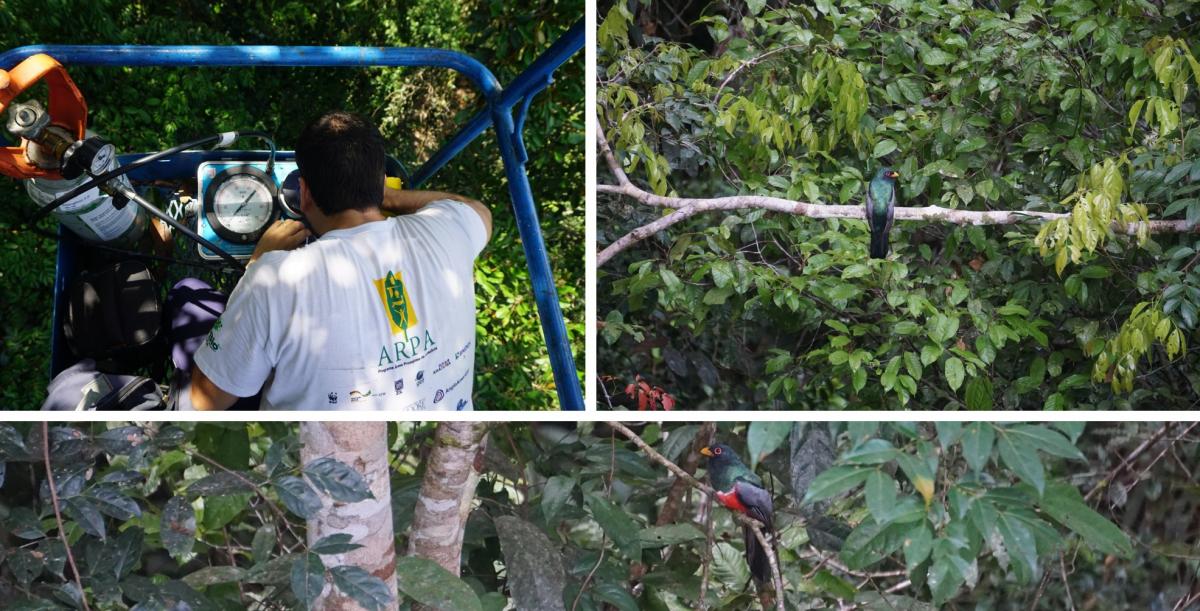 “In order to overcome the difficulty of performing in situ leaf-level measurements in the tropics some researchers use  towers, climbing techniques, and canopy walkways. However, these approaches are still risky, and only a few trees per day can be safely accessed. Just as others  in Panama City’s Natural Metropolitan Park, San Lorenzo National Park (STRI), and Daintree Rainforest Observatory in Australia, our group is developing, for the first time in the Amazon forest, a new canopy system that includes a 26-meter telescoping lift (“cherry picker”) that was recently transported from California, USA to Manaus, Brazil. Working at canopy-level in the Amazon rainforest is a fantastic thing. In the course of a day's work, you end up becoming integrated into the biodiversity of the forest, and the fauna eventually get used to your presence. When I was performing some leaf water potential experiments, a bird landed on a palm tree (Oenocarpus bacaba) and started happily feeding on its fruits. I stood for a moment admiring its coming and going between a tree branch and the palm fruit. Suddenly, he turned and stared at me. I felt that his gaze contained the strength of the whole forest and, at the same time, the simplest thing in life: a good meal. I later found out from a research friend that the bird is of the species Trogon melanurus.” 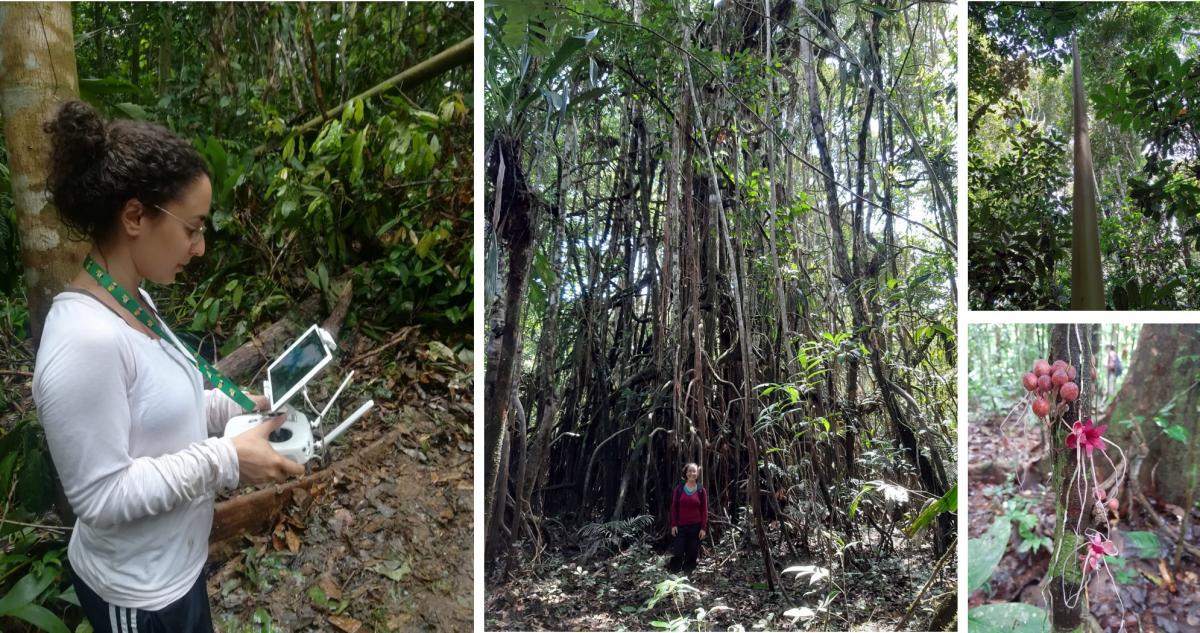 “I really like being in the field, enjoying the beauty of forests. In 2019 I went to Amacayacu National Park in the Colombian Amazon to do a drone flight over the 25-ha plot. I saw many memorable things in the field, including this big tree that had a lot of aerial roots, but no main stem. When I looked at this tree, I wondered, if it were inside the plot, what method would we use to measure the stem diameter?  Other trees that I saw that day had their trunks completely smooth, and others had beautiful flowers. How amazing the diversity of tropical forests is!!”

Yan Zhu is PI of the ForestGEO Donglingshan FDP.

“These photos were taken after a heavy hail storm that occurred on the morning of a summer day in 2005 in Zhaosu, Xinjiang (China). On that morning, we saw endless yellow rapeseed flowers, blue flax flowers, and purple lavender over the vast fields on the way. I was immersed in the beauty of Zhaosu Plateau, and suddenly I realized that there was a hail storm outside. Then I saw hundreds or thousands of horses rushing down the mountain and returning to the famous military horse farm nearby because the hail storm was very heavy. In a moment, the colorful spring scene turned into a white world. That scene was very impressive. Our car stopped and couldn’t move on the road. I was thinking we would have to cancel the field investigation for that day. A local guide said we just needed to wait for a while, that the ice and snow would disappear soon. What he said was true. In the afternoon, I had those bright pictures as if nothing ever happened.” 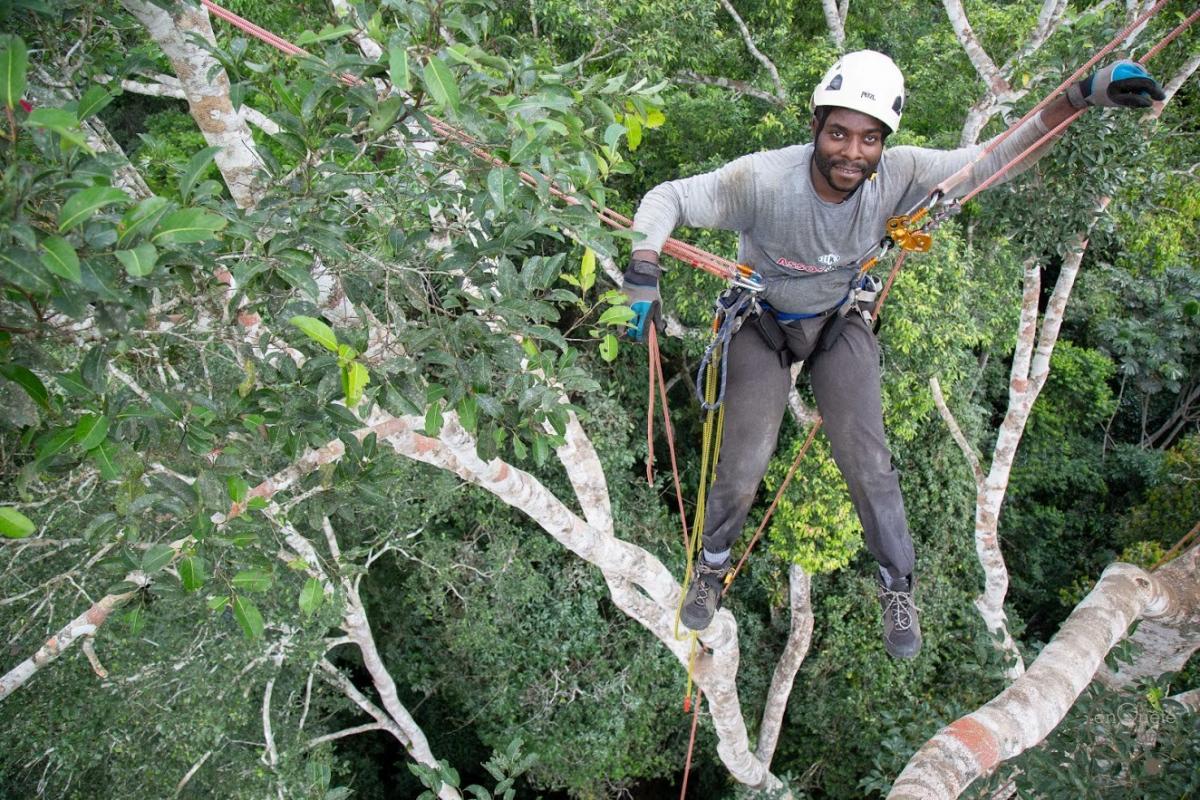 “I thought I had sufficient experience with the understorey of tropical forests. I also thought enough was known about the taxonomy of tropical tree species. I was comfortable climbing short-medium height trees only for the sake of botanical collections and fruit-harvesting.  Then came this dawn (pictured above) when I ventured to the tropical forest canopy using professional climbing gear. I realized that there was another world above the tropical forest canopies; the architecture, the biomass, the traits (functionality) were another universe to explore. From that day I began to nurture the idea of coupling temporal and spatial data analysis, including functional traits studies, into my research.”

“Time outside has been important in my life since growing up surrounded by the pine forests of southern Georgia, USA. This translated to fieldwork playing a central role in my master’s and PhD research where I was able to visit and collect from a number of ForestGEO plots. Visiting these plots has given me the unique experience of seeing first-hand how plant diversity differs from tropical to temperate forests. My most vivid memory in the field involves the contrast of walking through the Luquillo plot before and after Hurricane Maria. I spent the summer of 2017 in Luquillo and returned in January 2018 to a defoliated forest in the first stages of recovery. Throughout 2018 I made monthly visits to Luquillo and watched as seedlings germinated and grew, the canopy slowly closed, and the forest readied for the next disturbance.”

Marcel Vaz was a 2018 recipient of ForestGEO's Research Grant Program and has conducted research at ForestGEO’s Manaus, Brazil FDP. 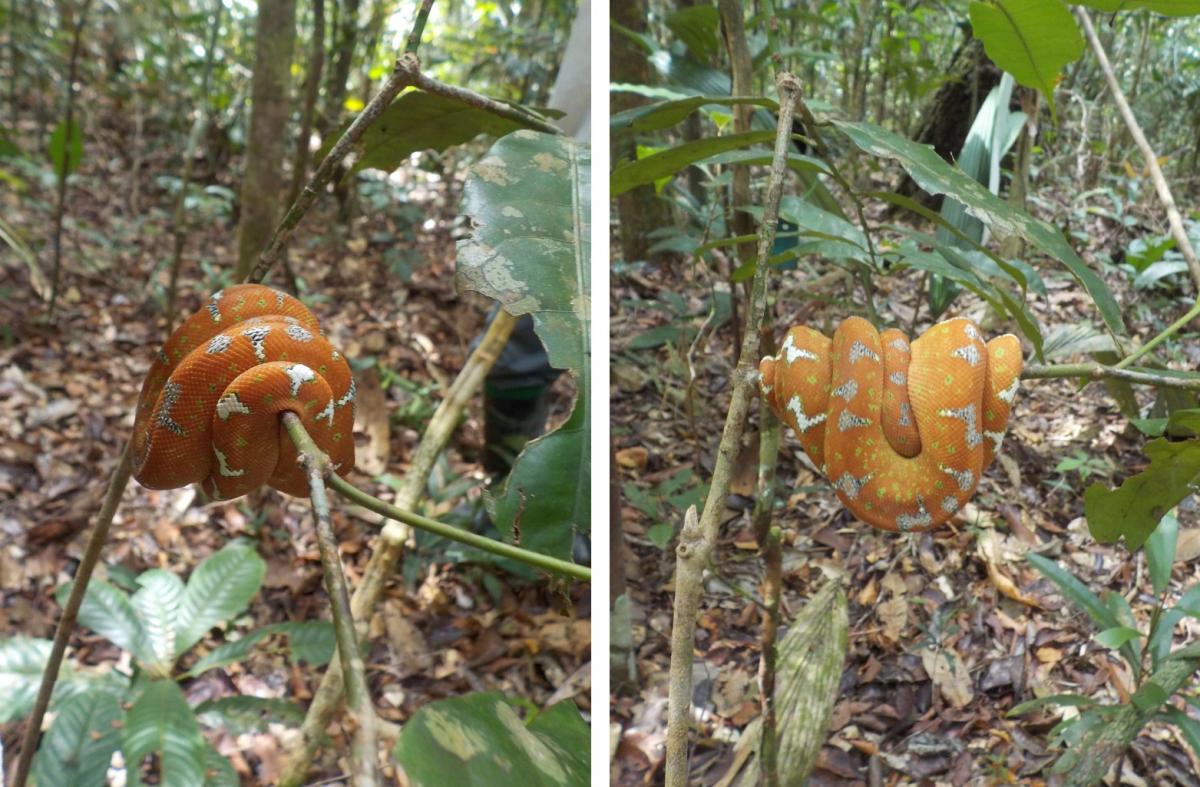 “Compared to other sites in the Amazon basin, the forest where I work is so slow growing and unproductive, that one could easily dismiss the thousands of animal species actually living there. This is because most animals (other than blood-sucking bugs) occur at very low densities and are usually pretty hard to spot amidst the dense vegetation (To be fair, because my focus is on plants, I am almost never actively looking for the animals.). In these terra firme forests, plants are the only guaranteed spectacle; that is, if you can see beyond all those shades of green. I am obsessed with the incredible diversity of plant shapes and sizes found in the tropics. Specifically, I am interested in how architectural designs of plants have evolved to deal with conflicting demands, such as maximizing light interception in the shaded understory, while also minimizing damage from falling debris. When growing in deep shade, some plants produce long horizontal branches to increase the odds of intercepting sunflecks, but this comes at the cost of structural stability. For these plants the biggest danger lies above, with many hanging rotten branches, old palm fronds, heavy woody fruits, or even entire dead trees about to fall. This constant threat becomes apparent in the abundant signs of past injuries most woody plants have in their stems; it also forces plants to construct branches that are sturdier than needed to support their own weight. Therefore, it should not come as a surprise that some animals will use these extra-sturdy branches for their own benefit, using them as a safe place to perch or build a nest, like some birds and wasps do. What I could never imagine, however, is that boas would include themselves in this unlikely list. In July of 2019, when I came across this beautiful emerald tree boa (Corallus caninus) peacefully sleeping on a branch of a short sapling, I could not believe my eyes. After several months of revisiting these photos and making the connections that I share with you here, I find joy in realizing that the evolutionary responsiveness of plant design to injury can provide some delightful resting spots for unsuspecting animals.”

Chia-Hao Chang-Yang is a PI of the ForestGEO Fushan FDP. 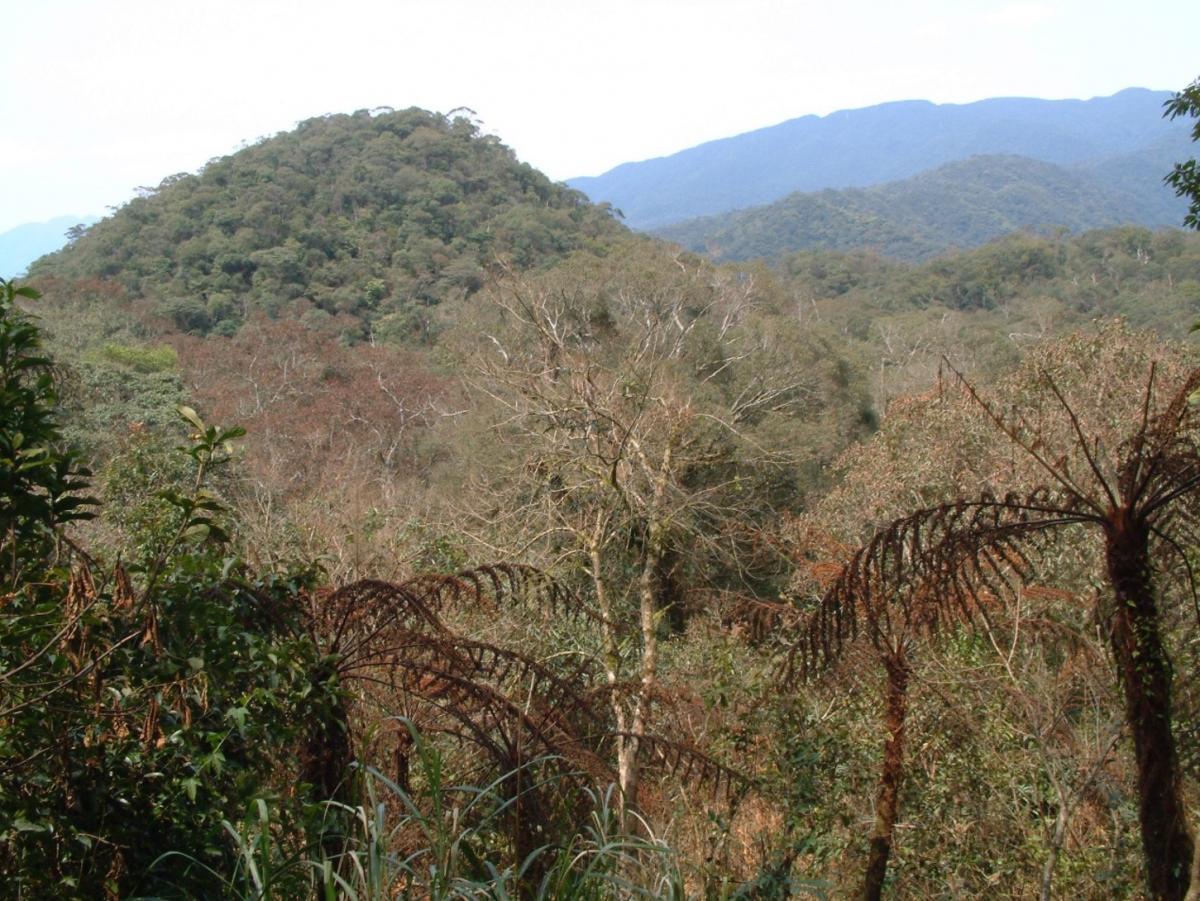 “Back to March 5, 2005.  A cold front just passed through Fushan.  Last night was cold and wet.  The freezing temperature was very unusual during this spring time.  I felt that I was in a huge refrigerator.  No heater in the research station.  And the air in the refrigerator in the research station was actually warmer than outside.  I checked the thermometer.  It was -3̊C.  Everything was frozen.  Luckily, the weather was pretty good that morning.  The temperature went up soon, although it was still a bit chilly.  We went to the botanical garden, and then to the 25-ha plot for the weekly seed rain census.  All the light-green new leaves had turned brown.  Trees of Fagaceae and Lauraceae appeared as if they had been burnt.  Tree fern, too.  Fast forward, and it turned out that the flower and seed production for most plant species in Fushan in 2005 were greatly reduced.  In later years we found that this frost event also had a long-lasting effect on seed production for many plant species.”

Send a photo (or two or three) and a paragraph-length description to forestgeo@si.edu.