The ForestGEO Arthropod Database went live earlier this month. The database is the latest project from ForestGEO’s Arthropod Monitoring Program, one of the network’s research programs. Started in 2009 by Dr. Yves Basset, the initiative is integral to ForestGEO’s mission to track and understand biodiversity of all organisms that make up forests.

This database will be a significant resource for researchers, or anyone interested in the biodiversity of forest arthropods. To celebrate its launch, Yves Basset and Phil Butterill (software developer for the Arthropod Database) answered some questions about the project. 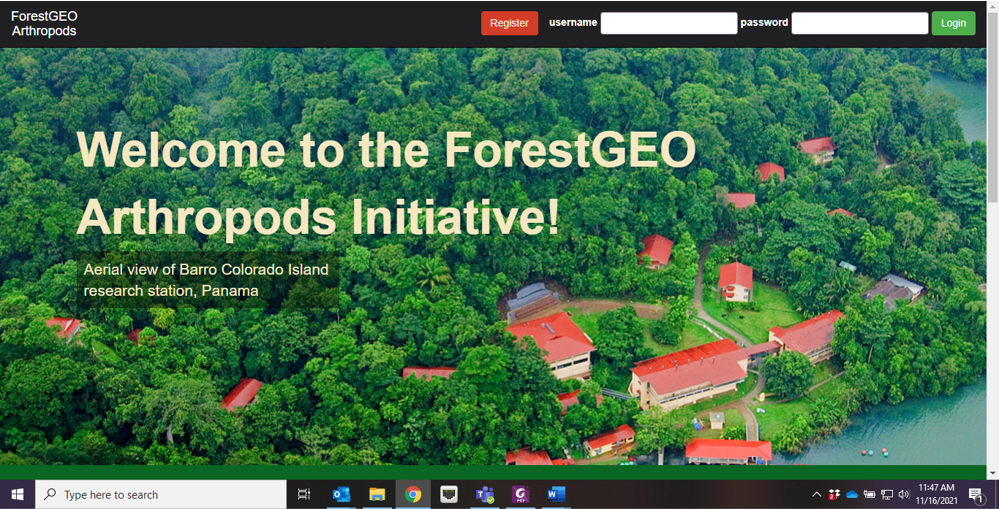 Can you briefly describe the kinds of data that the Arthropod Database includes?

Yves: Time series data at the level of species constitute the Arthropod Database. For example, BCI is represented through 12 years of data spanning 40-50 insect generations, depending on taxa. The strength of the data are the multiple taxa being monitored (n=16 at BCI), with very different ecology and life histories, and the large number of species covered. This covers termites to butterflies, for example. Tracking these data along with tree data can give us insights on pollination, herbivory, nutrient cycling, and other interactions between arthropods and trees.

How do you envision researchers throughout the ForestGEO network engaging with the database?

Yves: The data will be of interest to colleagues concerned with modeling time-series. The data are linked to the Barcode of Life database and display DNA barcodes for specimens, so are also interesting for entomologists in comparing local tropical faunas. Plant-insect interactions will be included in version 2 of the database (that is when Phil will have time to develop the required structure!).

The ForestGEO Arthropod Initiative collects data at seven sites. Which sites are currently represented in the Arthropod Database, and how many entries are there in total?

What’s the difference between an observation and a specimen?

That’s a lot of data. How long have you been working on this?

Yves: The insect monitoring started in 2009 at BCI. The BCI 50-ha plot was started in 1980, which sparked the creation of the ForestGEO network.

Phil: We started working on the database in 2015. Most of the work was done in the first couple of years, and the sites have been using the database for several years now. Like all IT projects, there are always improvements that can be made.

Out of all the changes and improvements that you’ve made, which feature excites you the most?

Phil: Although it’s not implemented in the web version, the functionality for barcode specimen labels was probably the most satisfying feature. Normally, you would need to purchase commercial software for such a task, but we got it working to specification using only open source packages.

So, the database has been in use for a while by the sites that contributed data, but the launch of this database makes the data more widely accessible to other researchers?

Phil: Yes. Researchers can create an account online, and then they have limited access to the data, which are available in various reports. They can also contact the project leadership to discuss ideas or request extra permissions. Sharing data is one of the ways ForestGEO functions successfully as a network – we wanted to increase those opportunities for collaboration with the arthropod database.

Are there plans to expand the Database?

Yves: Of course - the database will be expanded by adding points to the time-series.  Phil is also planning to develop version 2.0, which will include functionalities related to species traits and as mentioned above, to insect-plant interactions.

Are there ways that ForestGEO researchers can contribute to the Database?

Yves: ForestGEO researchers could plan to survey first and then monitor selected insect groups in their plot, to facilitate the comparisons of overall population trends.